ALD has been described as a thin film deposition technology that can keep the semiconductor industry on track per Moore's law (or observation) [1] for a few more years. In its most ideal form, it is a process that enables monolayer, or sub-monolayer growth of certain materials through the sequential exposure of a functionalized substrate to a pair of precursor gases. If dosed correctly the gases attach at specific surface sites and react to create a near perfect film on the order of a few angstroms thick. Presently the U.S. Department of Defense anticipates that the last process node for semiconductor devices (the end of Moore's) is 7 nm and will be achieved by 2020 [2].

The ubiquitous example of an ideal ALD process is the creation of Al2O3 monolayers on silicon substrates. Figure 1 depicts a four step process where a functionalized silicon substrate with hydroxyl group reaction sites is exposed to trimethyl aluminum (TMA). The precursor molecules chemically bond with any available attachment sites to create an aluminum-containing monolayer. 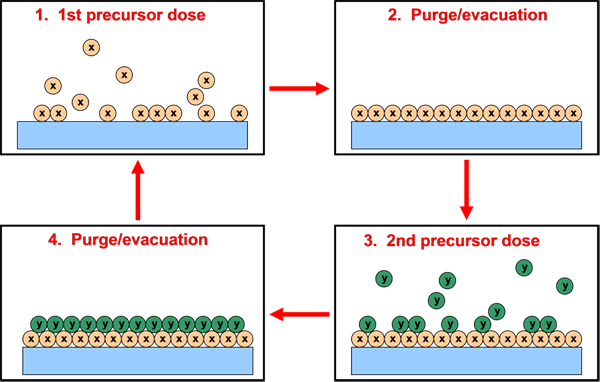 Next a purge gas is used to flush any extra, unreacted, or incompletely reacted precursor from the system. Oxidation then occurs through exposure to a mixture of carrier gas and H2O. After another purge step the process can be repeated and a stack of Al2O3 layers may result.

Range of Tool Sets and Processes

This novel deposition technology is practiced in many forms. There are a few large-scale, state-of-the-art tools being deployed by companies like Applied Materials, a few hundred commercially manufactured research scale systems built by companies such as Oxford Instruments, Picosun, and the Kurt J. Lesker Company®, and many home-grown systems made from scratch or adapted from existing tools. While systems from Applied may be focused specifically on a process, like Al2O3 and HfO2 for high-k dielectric applications, the research community continues to push the boundaries of film growth through the discovery and development of novel ALD chemistries. In the real world there is a predominance of non-ideal systems attempting to produce films from non-ideal materials pairings. See Figure 2. 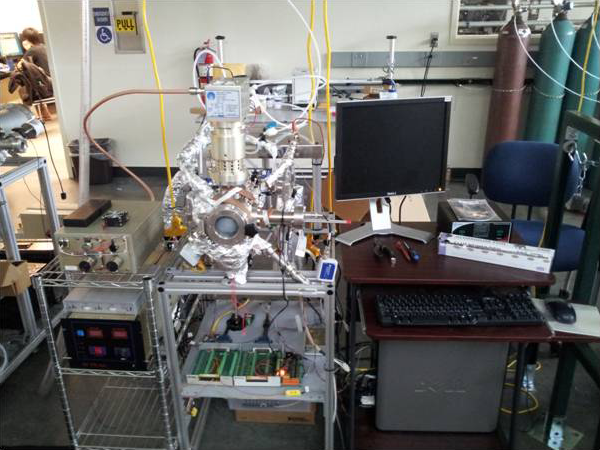 It is appropriate to review some basic vacuum principles in order to illuminate the challenges faced in the operation of ALD systems.

ALD uses an inert carrier gas, typically argon or nitrogen, to deliver precursor to the substrate and also minimize reactant condensation on internal system components. These functions require a continuous flow of gas at a pressure of ~10-3 Torr. At that pressure there is a mixture of nominally 2.4 x 1013 molecules/cc of carrier and precursor gases.

At a pressure of 10-3 Torr the ALD system is in viscous flow (versus continuum or molecular flow) with a carrier/precursor gas mixture of ~24 trillion molecules per cc rushing through the system. Flow in this regime is characterized by the development of vortices, dead zones, and unpredictable flow patterns. The viscous flow regime is given as an example of Chaos Theory [3]. While gas flow in an ALD system is deterministic based on known conditions, it is still not predictable. Mixing of the carrier gas and precursor during the dose cycle can also be an issue. The number of molecules involved are heavily skewed toward the carrier gas with the precursor molecules outnumbered by much more than 100-to-1 (Fig. 3). 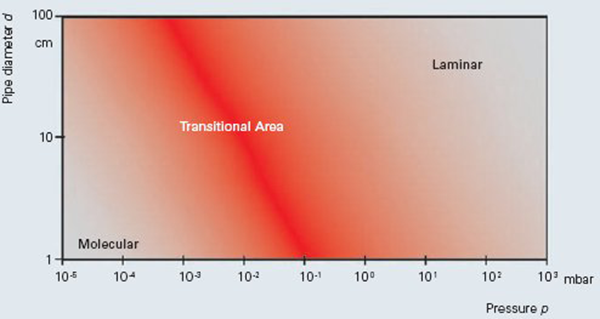 Figure 3. The relationship of pipe diameter and pressure to the transition point for Laminar, Transitional (Viscous), and Molecular flow regimes

To enhance the effects of a carrier gas, an ALD system may also be heated to further reduce unwanted film growth on internal hardware. The substrate is typically heated to promote a complete chemical reaction. Heat transfer in vacuum is a unique engineering challenge.

Furthermore, the temperature window for the combined functions of effective gas transport and chemical reaction is modest (typically in the range of 100°C to 350°C) and, ideally, tightly controlled. At the operating pressures of ALD there is little heat transferred by conduction or convection, so the process relies on radiation and energy exchange from molecular collisions.

In addition to critical equipment functionalities such as temperature and pressure control, as well as chemical resistance to the hostile precursors used in ALD, there are also unique peculiarities associated with many of the non-ideal chemical pairings required to make many desired thin films using ALD [4].

One of the keys to achieving dense, defect free, monolayer films is complete and perfect substrate functionalization. This implies the comprehensive siting of hydroxyls on the surface of a pristine silicon wafer or engineering the thickness of an oxide layer for FinFETs [5]. Given the chaotic gas flow conditions in a reactor, it is highly possible that regions of a substrate may not see the functionalization gases uniformly, or that functionalized sites might be ablated away by the torrent of carrier gas molecules continuously bombarding the substrate.

Figure 4. AFM images of ALD-Al2O3 films deposited with a variety of TMA/O pairings at 200°C showing incomplete monolayer formation (Source: The University of Texas at Dallas, 2014. [12])

Incomplete substrate functionalization can be a source of film defects. With an insufficient number of reaction sites for precursors the resulting film growth may not be in monolayers. Some of the substrate may be coated as planned, but films that nucleate in non-functionalized areas can be a source for non-conformity and surface roughness. They may also be sources of unintended chemical by-products during the ALD process where unreacted or incompletely reacted precursors are left to combine and form impurities.

Films growing under non-ideal conditions may display what is called delayed nucleation. When considering the growth of a film across the entire topography of a substrate, it is convenient to use this term when using weight gain to monitor the evolution of a film. Multi-cycle delays in the accumulation of material (on a quartz crystal monitor or QCM) are common. One considerable challenge is operating a QCM at the temperatures required for ALD; another is functionalization of the QCM's surface so that it attracts precursor and undergoes the same chemical reactions as the substrate.

For a given substrate there are a quantifiable number of functionalized reaction sites available to accept precursor molecules. While the number of sites can be calculated for a given substrate the calculation of a proper reactant dose requires some accommodation for effects that may prevent receptors from meeting a proper mate. Doses are typically calculated in Langmuirs, a unit defined as an exposure of 10-6 Torr for 1 second.

The chaotic nature of viscous flow, the ablative nature of swirling carrier gases, and time/temperature considerations of exposure must be weighed against the cost of process materials, hardware degradation, and throughput.

Deficiencies at the substrate surface cause regions of films deposited by ALD to divert from monolayer growth models. Island growth [6] tends to be the most prevalent result reported for poorly functionalized or improperly dosed substrates. The creation of mixed material layers has also been reported [7].

As mentioned, there are a wide variety of ALD systems in the field, some designed from scratch and others adapted from or added to existing tools. In adaptation many necessary and/or ideal hardware functionalities may be lost.

There have been many designs put forward for ALD reactors intended to mitigate some of the issues described. On paper, ALD can be done in a soda can (that can withstand an external pressure of 15 psi and the harsh chemistries required). Practically, system designs have taken the shapes of tubes, spheres, and more exotic forms engineered to optimize gas flows which may include shower heads, the use of curtain gases, and other schemes [8] (Fig. 5). 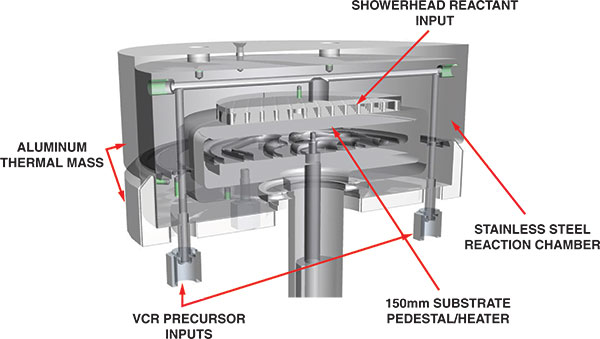 Heat management and temperature control of gases in vacuum

In addition to reactor chamber design there is the management of surface temperature to minimize condensation. To promote uniform heating and temperature control, reactant delivery systems are often equipped with localized heaters and engineered thermal masses to insure that heat is evenly distributed and held at the designated temperature (Fig. 7). 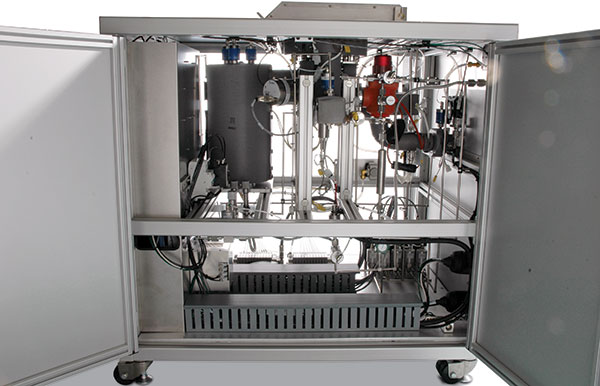 This highlights an additional condition for precursor material pairings wherein, ideally, both reactants have a similar non-condensation temperature and reaction temperature such that they may be used successfully. It is possible, though unlikely, for a system to change temperature between half-cycles to accommodate specific desorption, reaction, and decomposition requirements of precursors which are not 'thermally compatible'.

Needs for pre/post processing with heat/plasma

Adding functionality such as a plasma source may create issues with respect to system integration and protection from precursors. This step may also need to be done outside of the ALD module. The solid thin film battery electrolyte LiPON has been recently demonstrated using ALD from a complex quaternary precursor system [10]. After successful deposition and oxidation of lithium and potassium-containing films, a nitrogen plasma was used to remove oxygen and insert nitrogen into the Li3PO4 structure to make LiPON at nominally Li3PO3.95N0.05. The ALD/Plasma films exhibit an ionic conductivity similar to films deposited by reactive RF sputtering.

Unlike physical vapor deposition of thin films by thermal evaporation, where many users would suggest that 'not a lot can go wrong,' there are many system and chemistry related conditions which must be met in order for anything in ALD to go right. Unintended combinations of precursors, or unreacted precursor components, can prevent thin film growth, create inclusions or nucleation sites that inhibit desired growth patterns, or create hostile solids, like Al2O3 particles which can damage system components like valves and vacuum pumps.

Figure 8. Deposits of Al2O3 on vacuum pump internal components after failure in use during an ALD system cycle

As an example, even in ideal systems such as the widely practiced TMA/H2O pairing to produce Al2O3, excess precursors not adequately flushed from the system can react on the surfaces of vacuum pumps, quartz crystal monitors or in-situ analytical instrumentation to affect their rapid demise (Fig. 8).

Dual-trace systems, [7] which provide discrete gas delivery paths and exhausts for each precursor may be an approach which can accommodate competing thermal properties of individual precursor gases. The challenge of mixing a few billion molecules with a few tens of trillions of molecules during half cycle dosing may also be reduced. This approach may also reduce the opportunity for residual precursors to mix in the gas phase to create CVD-style reactions.

Some vacuum pump manufacturers have also invested in product modifications, such as increased rotational speed and operating temperature, to make their dry pumps more suited for extended service in ALD systems [11].

Technologies that promote cross-discipline collaborations often produce the most exciting results. Like many advanced processes, ALD continues to benefit from the collaboration of materials scientists including chemists, thin film technologists, vacuum technology experts, and great plumbers.

1. No Moore's Law for Batteries, Fred Schlachter, Proceedings of the National Academy of Sciences, vol.110 no.14, 5273

2. End of Moore's Law: It's not just about physics, Brooke Crothers and Robert Colwell, CNET August 28, 2013