In a July 2017 publication, Drs. André Anders and Yuchen Yang provide an enhanced description of the flows and energy of electrons at the face of a magnetron sputter cathode. By combining a unique imaging process and a linear cathode (target) the researchers were able to generate a series of time/space images which shows plasma instabilities driven by the motion of electrons, within the cathode's magnetic field. The images show the effects on plasma flow for both conventional DC magnetron sputtering (dcMS) and also high power impulse magnetron sputtering (HiPIMs). The full paper is available on line at http://aip.scitation.org/doi/10.1063/1.4994192.

Direct Current (DC) magnetron sputtering (dcMS) is a thin film deposition process that utilizes ionized gas atoms, typically Argon, to free atoms or molecules from a solid source, such as a metal, metal alloy, or ceramic, generally called the magnetron target. The atoms ejected from the sputter target due to the collisions of argon ions with the target surface then travel across a throw distance and deposit themselves in monolayers or clusters, which eventually evolve into a coating on a substrate. HiPIMs is an enhancement of traditional dcMS through the utilization of extremely large pulses of voltage/currents, leading to ionization of the sputtered atoms. Between high power pulses, the system gets an extended rest so that the average pulse time of the duty cycle does not exceed the thermal load on the cathode seen in typical of dcMS.

Anders, a Senior Scientist Affiliate, Lawrence Berkeley National Laboratory, has recently become the Director of the Leibniz Institute of Surface Modification, and is a Professor of Applied Physics, Leipzig University. Co-worker Yang is now a scientist at the Institute for High Energy Physics, Chinese Academy of Sciences – Beijing. The researchers have developed a technique which provides vivid illustration of the drift path of electrons and related ionization processes in both dcMS and HiPIMS. In the case of dcMS the region of strongest ionization or "spoke" rotates close to the surface of the sputter target, within the magnetic field of the magnetron, in a counter-clockwise direction. When operating in the HiPIMs mode, the spoke rotation is reversed. There appear to be two distinct mechanisms for the formation of the opposing drift patterns. 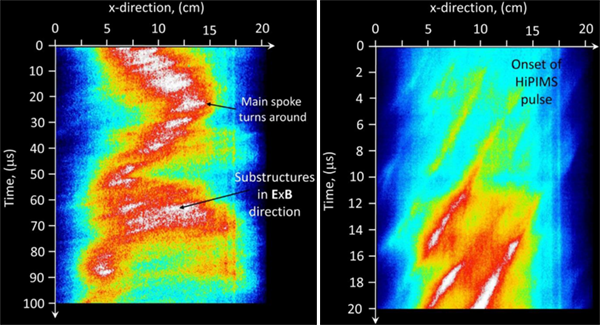 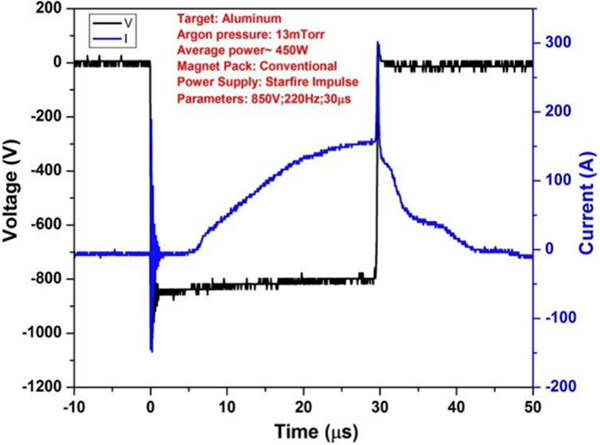 To better exploit the unique image acquisition approach, the researchers utilized an advanced linear cathode manufactured by the Kurt J. Lesker Company. The shape of the racetrack on a linear cathode is distinct from the traditional circular sputter gun and provides an alternative view of the flow of electrons in the +/- E x B directions. This cathode also demonstrates superb target utilization, easy integration with a vacuum chamber and the drop-down anode feature which enables quick sputter target changes with a minimum of disassembly/assembly required. 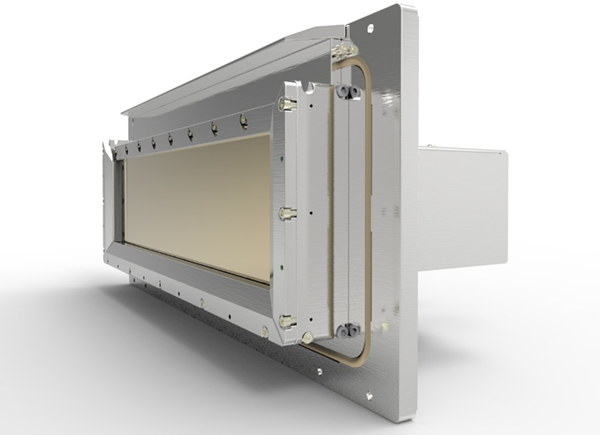 Figure 3: The linear cathode from KJLC at 5 x 10" featuring the drop down anode feature which enables quick target change over.

"In dcMS, there are always plenty of (gas) neutrals available to be ionized by energetic electrons; however, the situation is different in HiPIMS: neutrals may be locally depleted due to rarefaction and intense ionization. As was argued in Ref. 1, (Readers are referred to the original paper for detailed references on the prior work that lead to these observations), neutrals can locally be depleted by ionization in spokes, and ions will be depleted ("evacuated") by the local electric field. As a result, electrons arriving at a HiPIMS-spoke have to drift a bit further in the E x B direction to encounter neutrals to be ionized. This implies a displacement of the most intense ionization in the E x B direction. At intermediate current levels, between dcMS and HiPIMS, spoke direction reversal can be observed." 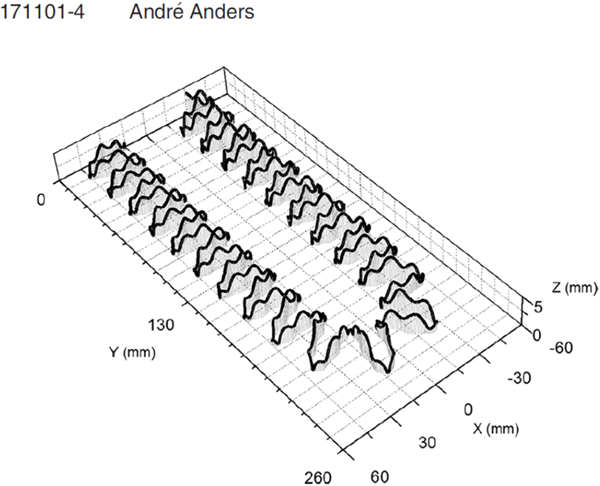 When queried about the impact of this new view of spoke movement at the cathode face on thin film growth models, Anders replied "The spokes (demonstrate) that the magnetron actually works. Without instabilities, the electrons would be trapped in closed ExB pathways and could reach the anode only via collisions. In the absence of sufficient collisions the discharge could stop or develop plasma instabilities that facilitate enhanced current transport.

On the film growth side, the instabilities produce a fluctuating plasma that will be smeared out in time because the growth time is much longer than the time spokes and plasma flares impact a growing film. So, in a first approximation, spokes on the magnetron side do not really matter on the film side. When we look closer, the plasma and material may arrive in waves. We have no information so far if the temporal structure really matters. We have focused so far our research on understanding what kind of particles arrive and what energy they have. Those parameters are affected or even enabled by spokes."

Electrons play an important role in magnetron sputtering as they increase the number of gas (typically argon) and sputter target atoms and molecules that get ionized. When asked whether this new observation has any implications for the angle of incidence or sticking probability for adatoms arriving at a substrate Anders commented, "Good question: the angle of incidence is affected when the sputtered atoms became ionized in a spoke: then the ion is subject the electric field in the sheath of the substrate. An ion is usually accelerated to the substrate and its angle of incidence is close to normal. The sticking probability is a function of energy and angle, and as the plasma is more ionized due to spokes, there should be some effect too. So far, this has not been directly quantified."

The Kurt J. Lesker Company is honored to support Anders and his co-authors in this very exciting work. There will be another publication on this topic from Anders et al… in the very near future.