The semiconductor manufacturing process is quite complex and the idea that the industry might turn the regulation of the chemicals it can use over to government agencies that might erect emissions restrictions without understanding of the technical challenges required to keep pace with consumer demands for smaller, faster and less expensive computing devices continues to motivate the industry to self-police its emissions of GHGs. What has been a miraculous effort in the few decades was revisited and revised in the last few years to extend the voluntary efforts to further reduce GHG emissions, even in the face of rebounding demand after the 2008 global economic melt-down.

Challenges to the semiconductor industry for further reductions in GHG emissions are tied to changes in process, process materials, abatement, and demand. For an industry that is struggling to keep pace with Moore’s Law, or anticipating new manufacturing approaches that embrace the "The End of Moore’s Law" (ref 3), new approaches to emissions reductions must fit into a highly complex engineering solution.

Every change in semiconductor processing requires extensive capital investment, prolonged testing and risk. Simple drop-in solutions which achieve further emissions reductions are almost non-existent. High Boiling Point (HBP) perfluorinated (PFC) heat transfer fluids are one of the few drop-in solutions available because these materials are completely miscible with traditional Low Boiling Point fluids. They have no effect on the operation or maintenance of temperature control units (TCUs) due to the complete compatibility with seals and gaskets, with no impact on power consumption, no additional capital costs, and no impact on chuck temperature stability (ref 4, Higgs - SESHA).

A drop-in solution to GHG emissions

Heat transfer fluids (HTFs) currently represent about 10 - 30% of the GHG emissions from a typical fab. These emissions are in the form of fluids lost due to leaks in TCUs and natural evaporative losses that occur in open air systems or during high temperature processing. Traditional heat transfer fluids, such as water/glycol mixtures and hydrofluoroethers (HFEs),have relatively high vapor pressures resulting in high evaporation rates which contribute substantially to GHG emissions. (Ref 5, EPA, Uses & Emissions..)

The new fluids developed by Solvay and others are perfluorocarbons (PFCs) with chemical compositions including CnF2n+2 , CnF2n+1(O)CmF2m+1 , and CnF2nO and (CnF2n+1)3N, where typically n > 6 and m is nominally 2 - 3. These materials are specifically engineered to have very low vapor pressures. Fluids with EVPs less than 1 torr are considered High Boiling Point (HBP) fluids with maximum temperatures on the order of 150 - 270 °C. 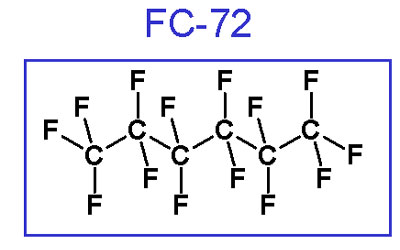 An example of a typical PFC structure (3M product FC-72)

By staying out ahead on GHG emissions the semiconductor industry has been able to maintain a high degree of control over the chemical pallet at its disposal. But the landscape had a major makeover in 2014 when the US EPA revised the Global Warming Potential for certain chemicals such as perfluorinated HTFs from ZERO (read: not previously rated) to 10,000 for some compositions. From the US EPA’s web page "Understanding Global Warming Potentials" (Ref 9. US EPA):

The Global Warming Potential (GWP) was developed to allow comparisons of the global warming impacts of different gases. Specifically, it is a measure of how much energy the emissions of one ton of a gas will absorb over a given period of time, relative to the emissions of one ton of carbon dioxide. The larger the GWP, the more that a given gas warms the Earth compared to carbon dioxide over that time period. The time period usually used for GWPs is 100 years. GWPs provide a common unit of measure, which allows analysts to add up emissions estimates of different gases (e.g., to compile a national greenhouse gas inventory), and allows policy-makers to compare emissions-reductions opportunities across sectors and gases.

Carbon dioxide (CO2), by definition, has a GWP of 1 regardless of the time period used, because it is the gas being used as the reference. Carbon dioxide remains in the climate system for a very long time: carbon dioxide emissions cause increases in atmospheric concentrations of carbon dioxide that will last thousands of years.

In November 2013 the US EPA substantially revised the global warming potentials for a wide range of greenhouse gases and added three new GHGs to the list of reportable emissions (Ref 12). Gases classed as PFC-6-1-12 and PFC-7-1-18 with GWPs of 7,820 and 7,620 were added to the list of materials covered under the mandatory greenhouse gas reporting provisions (Ref 10). The GWPs of several other PFC classes, such as PFC-14, PFC-116 PFC-218 and PFC-3-1-10 were also substantially increased. So while GHG emissions reported for the US semiconductor industry have fallen consistently for many years, the inclusion of these new classes of PFCs contributed to an increase in emissions for 2014 from 2.9 million metric tons (CO2 equivalent) to 3.0 (Ref 11, 13).

Because of this new and dramatic acknowledgement of the profound impact of perfluorocarbon emissions on our climate these fluids are newly recognized to be responsible for a significant contribution to the industry’s environmental load. These gases are potent absorbers of heat in the atmosphere, contributing to a 'thickening’ in the earth’s blanket, and they are extremely long lived─the longest of any greenhouse gas emission caused by humans. Fluorinated gases are very tough to remove from the atmosphere and the primary mechanism is their destruction by sunlight once they reach the far upper regions of the atmosphere.

Globally there were approximately 190 semiconductor device fabrication facilities in production as of 2010 (Ref 6). Those fabs are disbursed around the world within three distinct regions and 26 host countries. They are summarized in the table below by region, wafer size, and the estimated number of systems in use that may require TCUs including PECVD, dry etch, ion implant, and stepper tools. (Ref 5).

In order for these HB fluids to be a drop-in replacement they need to have identical heat transfer performance as well as complete compliance with the seals, valves, and other critical components of the process tool in which they will be used. They also need to be completely miscible with the fluids they are replacing so there are no cleaning issues related to replacement. The graphic below details a comparison of heat transfer performance between perfluorocarbon fluids with a relatively low boiling point with one of the more advanced chemistries for HTFs with a boiling point on the order of 170 C. These results were deemed identical by industry experts. (Ref 7) 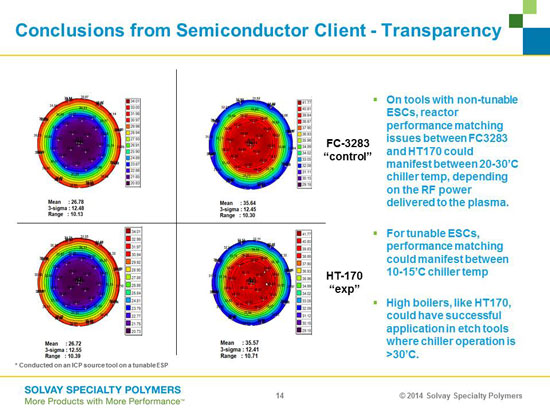 Potential reductions can be estimated using data compiled by the US Environmental Protection Agency and some company specific data provided by IBM and others. In the 2004 study by the investment firm Smith Barney, the number of temperature control units in use at 200mm fabs averaged 125 with a coolant capacity (for those using exclusively perfluorcarbon fluids) of 188 - 2650 gallons per unit. For 300mm fabs the numbers are 140 TCUs with capacities ranging from 210 - 7,000 gallons per system. 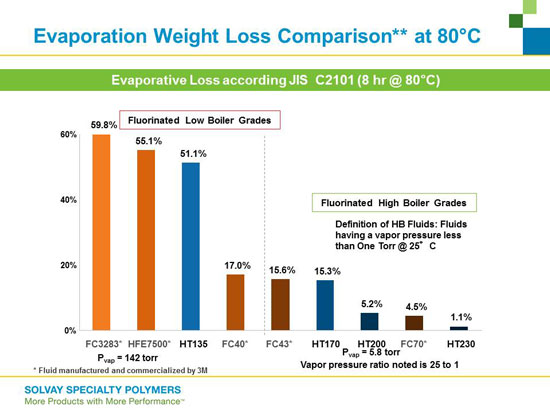 Table 3. Comparison of Evaporation Rates for Various HTF's at 80°C

While the EPA states that it is still difficult to get a comprehensive global inventory of the number and capacity for TCUs for every facility, they have estimated that typical annual usage of perfluorocarbon HTFs is on the order of 8 gallons per system. With more than 190 fabs world-wide, with a total TCU fleet on the order of 25,000 tools, that is an estimated demand for 200,000 gallons of HTFs per year.

A summary of semiconductor fabs by country with an estimate of the annual requirements for new heat transfer fluids in the following table:

In addition to the facilities listed above there are 19 new fabs planned for construction in 2016 - 2017. Existing fabs also plan to add about 40 new production lines by 2017.

Impact at the individual fab level

Emissions due to heat transfer fluids represented about 15% of the Scope 1 inventory for IBM in 2014 - with the amount emitted increasing about 22,000 metric tons from 2013 to 2014 or +35%. Some of the increase is attributable to new reporting requirements for certain classes of PFCs as well as the adjustment (increase) GWP for several classes of gases which had been previously reported. With the availability of high boiling point HTFs Higgs, in his SESHA 2016 presentation has identified emissions from low boiling point HTFs as one of the few remaining 'low hanging fruits’ in the quest for continual improvement (reduction) in emissions, preferably absolute, but at least on a per-square-centimeter-of-wafer produced basis (Ref 4).

At this writing many of the world’s fabs have begun the transition to high boiling point HTFs. But if we were to assume that using the 2014 IBM emissions inventory, their 83,566 metric tons (of CO2) equivalent was due exclusively to low boiling point perfluorocarbon fluids, based on an evaporative loss on the order 15% per year, and they made the switch to high boilers with evaporative losses an order of magnitude less, they could reduce emissions on the order of 75,000 metric tons. That would reduce total Scope 1 emissions more than 13% over 2014 levels.

There are additional processes in the semiconductor industry that use TCUs loaded with advanced HTFs, including Automated Test Equipment for semiconductor devices. The use of HTFs assures temperature stability during the testing of semiconductor devices while greatly reducing process time. HTFs are also used in Thermal Shock Test systems (TST) designed to identify mechanical defects in electronic devices and systems. While data for HTF usage in TSTs is more complicated to track than for the tools listed above (PECVD, dry etch, ion implantation and steppers) older TST systems may lose as much as $20,000 per year in HTFs. Newer systems are more frugal with losses on the order of $1,600 per year.

Perfluorinated heat transfer fluids represent one of the few simple drop-in replacement solutions to reduce GHG emissions for the semiconductor industry. In addition to the dramatic reduction in emissions achievable by using high boiling point heat transfer fluids there is a complementary reduction in operating costs. With these advanced HTFs costing nominally $500 per gallon, an order of magnitude (or more) reduction in evaporation rates can correspond to an annual savings of several hundred thousand dollars per fab.

Certain greenhouse gases (GHGs) are more effective at warming Earth ("thickening the blanket") than others.The two most important characteristics of a GHG in terms of climate impact are how well the gas absorbs energy (preventing it from immediately escaping to space), and how long the gas stays in the atmosphere.

The Global Warming Potential (GWP) for a gas is a measure of the total energy that a gas absorbs over a particular period of time (usually 100 years), compared to carbon dioxide.[1] The larger the GWP, the more warming the gas causes. For example, methane's 100-year GWP is 21, which means that methane will cause 21 times as much warming as an equivalent mass of carbon dioxide over a 100-year time period.[2]