Many optical coating applications require excellent uniformity in both the physical thickness and optical properties of the deposited films. As interest grows in sophisticated coatings on challenging substrate shapes, such as aspheres, high performance eyewear, beveled cell phone screens, camera lenses and a variety of other products, meeting these uniformity requirements becomes more difficult.

Physical masks are typically used along with substrate motion to control thickness uniformity. In the case of thermal evaporation, which uses small sources, large throw distances, and is line-of-sight in nature, this is often adequate and numerous models exist for generating mask designs [1]. However, even when models are used, shadow masks take time to produce and adjust and can be a source of flakes leading to particulate defects. And as the substrate size is reduced, properly aligning the masks over a large number of small parts becomes a problem.

Achieving uniformity for sputtered coatings is even more difficult. Sputtering uses relatively large sources and small throw distances, scattering by the working gas makes it non-line-of-sight, and the distribution of the sputtered material can change with time as the target erodes. These factors make calculation of a precise mask design for complex shapes very challenging. Furthermore, the scattering of sputtered material depends on the atomic mass so that a single set of masks may not be able to provide the needed uniformity for two materials. To address these issues, complex motion of the masks or masks that are attached to the substrates has been suggested [2,3]. The approach taken here eliminates the need for such complicated solutions.

In this paper we describe a completely new method of achieving excellent uniformity on both flat and curved surfaces without masks. The system relies on inverted cylindrical magnetrons, which sputter from the inside surfaces of cylindrical cathodes. The plane of the substrate holder is perpendicular to the cathode axis, so that the substrates are coated in an off-axis configuration (not directly facing the targets). By adjusting the position of the substrates along the cathode axis and rotating them in a conventional dual planetary motion, excellent uniformity is possible on substrates ranging in shape from flat to cylindrical.

a. Cathodes and Cathode Operation

The key to the system is the use of two inverted cylindrical magnetron (ICM) cathodes. Each cathode has two electrodes that are driven with mid-frequency AC power, as shown in Figure 1.

Metal targets with inside diameters of 400 mm and heights of 100 mm fit inside each electrode and for the work reported here, one cathode contained two Si targets and the other cathode contained two high index material targets, either Ti or Ta. Sputtering was done with the target surfaces completely oxidized (the fully poisoned mode) in order to work in a stable part of the hysteresis curve. The process gases were introduced above both cathodes and typical conditions were 35 sccm of both Ar and O2, which resulted in a pressure of 3 mTorr as measured by capacitance manometers in each cathode. The SiO2 was deposited at a total power of 2.0 kW, the TiO2 at 4.0 kW and the Ta2O5 at either 4.0 kW or 6.0 kW. At 2.0 kW the SiO2 deposition rate is 12 nm/min and at 6.0 kW the Ta2O5 rate is 11 nm/min.

b. Ion Assisted Deposition without an Ion Source

The ICM cathodes incorporate unbalanced magnetic fields, as illustrated by the arrows in Figure 1 [4,5]. A very important consequence of this magnetic field configuration in combination with mid-frequency power is that significant ion production occurs when secondary electrons cross the field lines as they flow to the instantaneous anode [6]. In addition, secondary electrons can move easily along the unbalanced field lines, represented by the large arrows extending out the ends of the cathode, and they produce a significant negative self-bias on the substrate. The self-bias and high ion density result in a low energy ion flux of approximately 2 mA/cm2 that bombards the growing film [5]. This is similar to the ion fluxes found in other ion enhanced deposition systems, but without the need for a separate ion source.

Figure 2 is an illustration of the mechanical configuration of the system. The chamber on the upper left is a load lock and a cutaway of one of the cathodes can be seen on the upper right. The second cathode is in the rear.

Substrates are held on 300 mm diameter platens and in the configuration used for this work each platen contained 16 substrate holders, each with a diameter of 50.8 mm. The holders are arranged in four sets of four moving in dual planetary motion. That is, each set of four holders rotates about a central axis and each holder rotates about its own axis. Other configurations are possible and in one set of experiments 100 mm diameter rotating substrates replaced the 50 mm substrates. We also measured the uniformity for 250 mm diameter stationary substrates.

The load lock is used to increase throughput and improve coating repeatability. A platen is manually loaded into the load lock and once the setpoint pressure is reached it automatically moves from the load lock onto a transfer arm in the large central chamber. The platen is then rotated to a position below the appropriate cathode and lifted into position in that cathode. Full computer control tracks the platen and takes it through the deposition cycle following a defined program recipe. 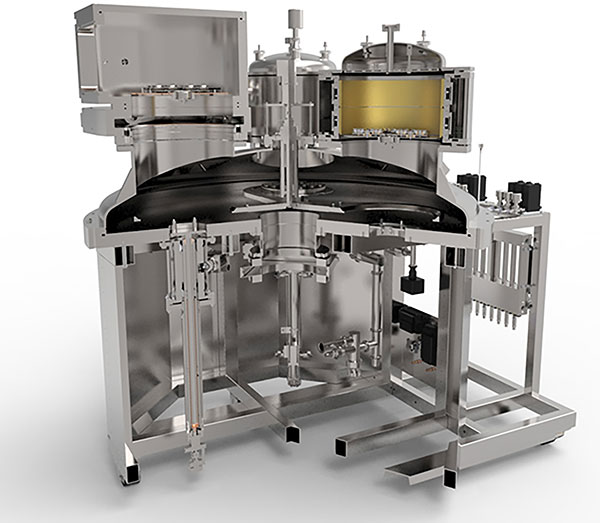 Figure 2. Cutaway view of the system layout showing the load lock on the left and sputtering cathode on the right.

There are several additional advantages to the cathode design and off-axis configuration. Because the substrates do not face the targets directly, they are not bombarded by high energy reflected neutral atoms and negative oxygen ions formed at the target surface, which are known to produce high levels of stress in sputtered coatings. Moreover, the total target area in each cathode is 2,500 cm2 so that cylindrical targets that are only 2 mm thick provide the same material inventory as a 25 cm diameter by 1 cm thick conventional circular magnetron. The much shallower erosion grooves that result with thin targets have a minimal effect on the sputtered material distribution over the target lifetime. Finally, the large target area permits operation at power densities of 3 W/cm2 or less, which virtually eliminates arcs and microarcs that are sources of particulates that can get entrained in the coatings.

The reflectance spectra of coatings deposited on Si wafers were measured using a Filmetrics Model F2 and the values for the indices and thicknesses were found by using the Filmetrics internal software to generate the best fit to the data in each case. The fits for the SiO2 and Ta2O5 measurements were 99.9% for three samples of each material made in separate runs. Previously, indices for SiO2 and Ta2O5 were measured using ellipsometry on coatings produced in a prototype system having targets with inside diameters of 330 mm, but that were otherwise identical to the ones in the present system [5]. Table 1 shows the results for the real part of the index at a wavelength of 633 nm for both sets of measurements.

The data in Table 1 show that the coatings produced with unbalanced inverted cylindrical magnetron cathodes using mid-frequency power have indices that are comparable to those produced in other ion enhanced deposition processes.

Ta2O5 samples were submitted for durability testing according to MIL-C-675C, MIL-C-48497A and MIL-M-13508C and met the requirements for adhesion, humidity stability, temperature stability and moderate abrasion. SiO2 and Ta2O5 samples deposited in the prototype system were measured for their change in thickness and index as functions of temperature up to 350 C using ellipsometry [5]. No changes in either the thicknesses or indices were seen up to 150°C. At 350°C the indices of both materials increased by approximately 0.4% and the thicknesses of both decreased by approximately 0.4%, leaving the optical thickness unchanged in both cases.

As discussed, film thickness uniformity on substrates with different curvatures is controlled by adjusting their z position along the axis of a cathode during deposition. In order to map the thickness uniformity on substrates with various curvatures, TiO2 was deposited onto 50.8 mm diameter BK7 flats and lenses at different z positions. The radii of curvature of the lenses were -51.5, +51.5 mm, +103 mm and +206 mm, where – refers to concave and + to convex. Dual planetary rotation was used in all of these cases. Si wafers with diameters of 127 mm were also coated and were only rotated about their own axes. Finally, 152 mm diameter Si wafers were used to measure the thicknesses from the center of the substrate holder to a radius of 125 mm at several z positions without any substrate rotation.

The reflectance spectra of the coatings on the BK7 substrates were measured at the center and edge using a Filmetrics F10 AR unit with a fiber optic probe. The relative thickness difference from the center to the edge for each substrate was calculated by measuring the difference in the wavenumbers at which the reflectance extrema occurred divided by the average wavenumber. Using this method, three replicate sets of measurements of a lens having a radius of curvature of -50.8 mm gave a pooled standard deviation for the total variation of a given measurement of the thickness of 0.05%. The thicknesses on the Si wafers were measured using a Filmetrics Model F2 unit.

Figure 3 shows the difference in thickness from center to edge as a function of z position for TiO2 coatings on BK7 lenses having a radius of curvature of +51.5 mm. 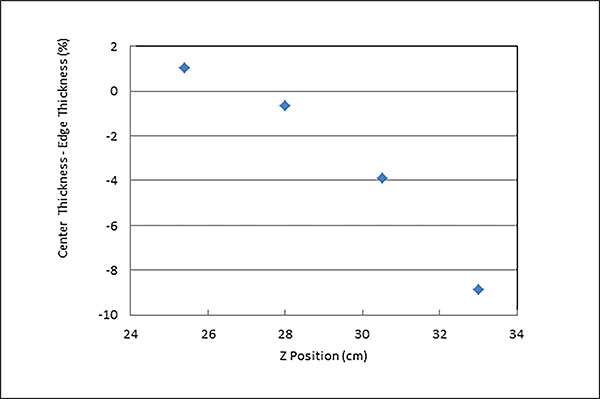 Figure 3. Relative difference in TiO2 film thickness from the center to the edge of convex lenses coated at different z positions. In each case the substrate diameter was 50.8 mm and the radius of curvature was +51.5 mm.

These data illustrate the general result that as a convex substrate is moved further into the cathode, the relative thickness on the edge increases. This agrees well with calculated results based on a model that assume a cosine distribution of material from the targets.

Table 2 summarizes the optimum uniformity results for the BK7 flats and lenses as well as for the Si wafers.

Table 2. Coating thickness uniformity for substrates with a variety of curvatures at the optimum z position in each case

We should emphasize that because we are taking advantage of the material distribution produced by the targets, coatings can be produced on small lenses with uniformities that would be very difficult to achieve using masks because of the registry problem mentioned earlier.

Figure 4 shows the relative thickness from the center of the substrate platen out to a radius of 125 mm for Ta2O5 deposited onto a stationary substrate. 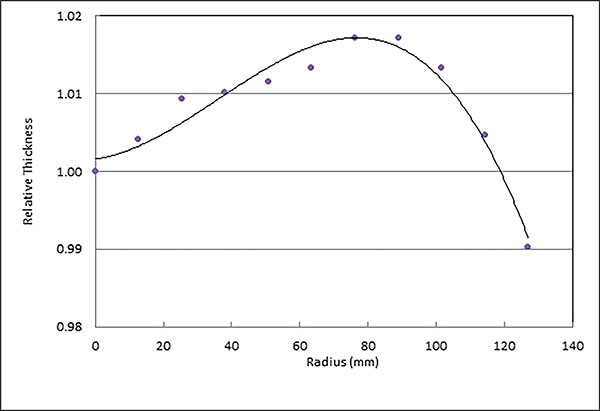 Figure 4. Relative thickness measured from the center of the substrate platen for a stationary substrate

These data show that a thickness uniformity of ±1.0% can be achieved over 200 mm diameter stationary substrates or ±1.5% over 250 mm diameter stationary substrates. And in some applications it may be desirable to take advantage of the ±0.5% uniformity that can be achieved over a 20 mm to 100 mm annulus, which is an area of 300 cm2.

We have presented results on a new method of depositing coatings onto both flat and curved surfaces with excellent uniformity without the need for masks using sputtering sources that achieve ion enhanced coating quality without a separate ion source. The system is simple and extremely flexible, allowing substrates of different shapes with different layer structures to be in process simultaneously. In the case of flat substrates, excellent uniformity is possible over large areas without motion.

For answers to questions or to request further information, please contact sales@lesker.com