Uncovered Potential of Co2MnGa in Spintronics

The Kurt J. Lesker Company continues to support the researchers who are advancing the science and technology of spintronics around the world. Co2MnGa, a Heusler material, has been attractive to scientists as a novel magnetic conducting material on which spintronic structures like magnetic tunnel junctions can be built. Recent work, published in Applied Physics Letter titled "Perpendicular magnetic anisotropy in Co2MnGa and its anomalous Hall Effect" by Dr. Ludbrook, Dr. Ruck and Dr. Granville from Victoria University of Wellington, New Zealand, has identified characteristics of thin film Co2MnGa that are necessary for realizing magnetic tunnel junctions.

Heusler compounds are minerals with chemical composition of X2YZ, where X and Y represent transition metal elements such as Mn, Fe and Co, and Z represents elements from the p-block of the periodic table such as Ga, Ge and Si. The Heusler materials have been extensively investigated as candidates for spintronic applications [1]. Spintronics, also known as spin electronics, is the field of exploiting the quantum mechanical property of the electron, called spin, to manipulate the functionalities of electronic devices. An example of spintronics from our daily lives is the memory in personal computers and smart phones. Additionally, theoretical investigations in condensed matter physics have predicted that the cobalt based Heusler compounds Co2YZ are magnetic Weyl metals, a class of materials that can be employed in thermoelectric applications and quantum computation [2]. The research on Weyl materials is interdisciplinary and represents the frontier of modern condensed matter physics and materials science and engineering.

Co2MnGa is ferromagnetic with the Curie temperature of about 700 K and the saturation magnetization of 700 emu/cm3 [3]. Compared to other members in the family of cobalt based Heusler materials like Co2MnSi [4], the Curie temperature and the saturation magnetization of Co2MnGa are lower. What makes Co2MnGa interesting, however, is that this material is highly resistant to oxidation, making it ideal for device engineering. In addition, the crystal structure of Co2MnGa matches the one of GaAs very well (the lattice mismatch is about -0.4 %), which allows Co2MnGa to be easily integrated with GaAs platforms. By measuring the intricate interactions between the thermal, electric and magnetic properties of Co2MnGa, the thermoelectric conductivity of this material was found to be higher than many magnetic structures [5,6], which might be explained by the theory of Weyl metals [6].

While the properties of bulk single crystal Co2MnGa are well understood, the electric and magnetic properties of Co2MnGa in the form of thin films are little known. To elucidate the physics of Co2MnGa thin films, Dr. Ludbrook, Dr. Ruck and Dr. Granville from Victoria University of Wellington, New Zealand, fabricated the heterostructures of Pd/Co2MnGa/MgO on Si substrates [7].

The samples were synthesized by magnetron sputtering in a Kurt J. Lesker CMS-18 system with the base pressure of 2x10-8 Torr (see Figure 1). Multilayer stacks were prepared on 10 mm x 10 mm Si substrates with native oxide layers. As an insulation layer, 2 nm MgO layer was formed by radio frequency (RF) sputtering at a growth rate of 0.05 Å/s. Co2MnGa layer and the top electrode Pd were DC sputtered at the growth rates of 0.69 Å/s and 4.0 Å/s, respectively. Samples were created at room temperature and post-annealed in-situ for 1 hour at 300°C. The growth rates were calibrated by measuring the thickness of the films. The stoichiometry of Co2MnGa was verified by energy dispersive X-ray analysis in a scanning electron microscope (SEM). Magnetization and Hall resistance measurements were done by Quantum Design superconducting quantum interference device (SQUID) and physical property measurement system (PPMS) respectively. 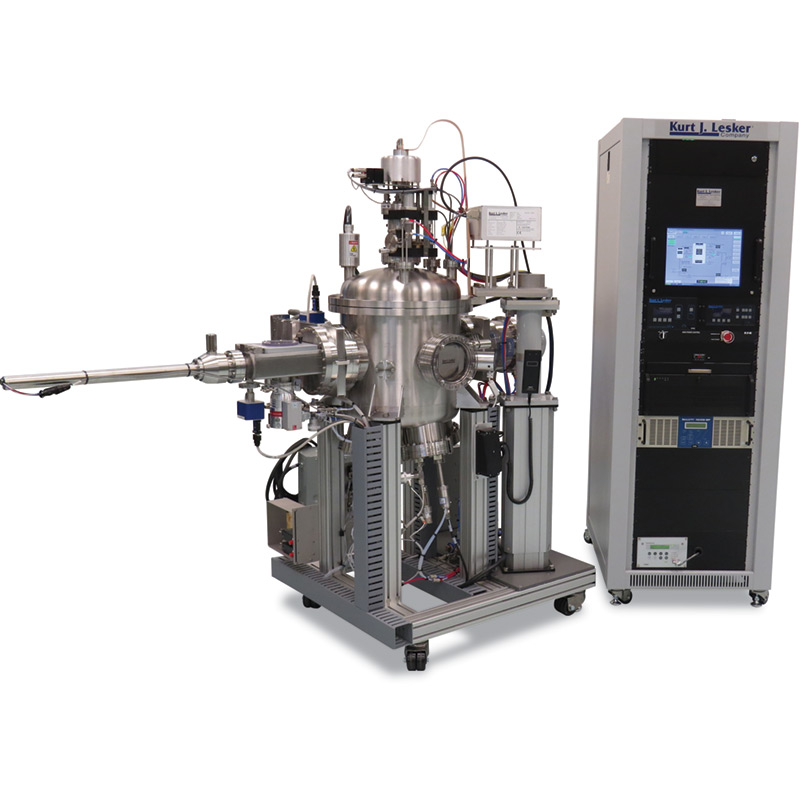 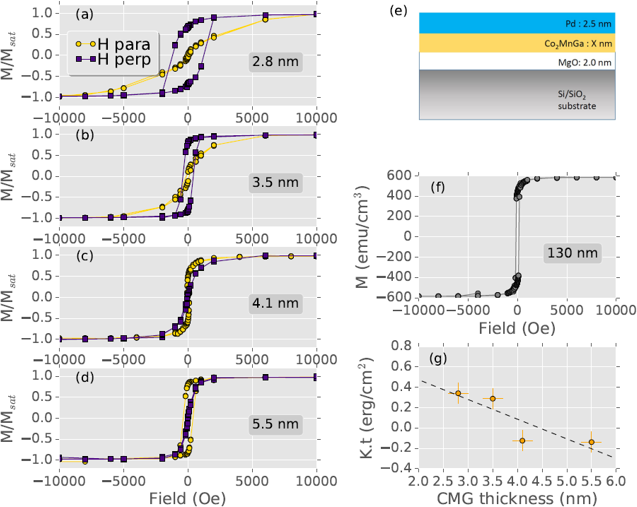 Figure 2: Magnetization measurement demonstrated perpendicular magnetic anisotropy in Co2MnGa. (a-d) Normalized magnetization loops at 300 K measured with the field parallel to the film plane (gold circles) and perpendicular to the film plane (indigo squares). The thickness of the Co2MnGa layer is given in each plot. (e) The multilayer structure of the samples. (f) Magnetization at 300 K for a 130 nm thick Co2MnGa film measured with in-plane field. (g) The magnetic anisotropy energy density extracted from the data in (a-d).