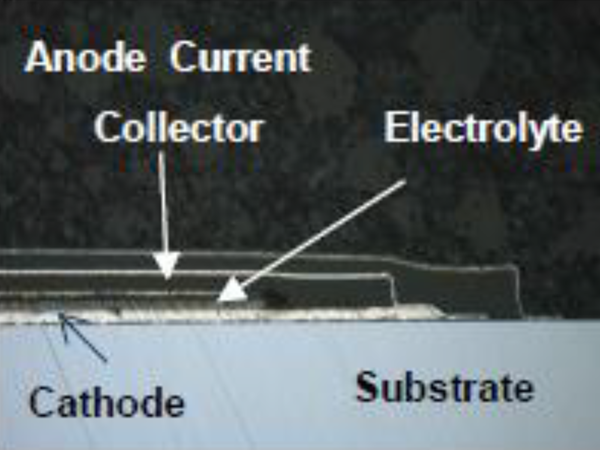 These batteries are nominally 15 microns 'thin' (Figure 1), and are typically fabricated on substrates which are much thicker (50 – 170 microns). These batteries, manufactured using deposition techniques including DC and RF magnetron sputtering and thermal evaporation, are stars of the battery industry due to their cycle life, safety, and form factor. Commercial manufacturers claim cycle lives in excess of 10,000 charge/discharges [3]. Other advantages include:

The original Bates patent on LiPON was awarded in 1994. Commercialization of the technology was seen as something of a role model showing how our national laboratories develop and transfer disruptive technology to private industry and then support its commercialization.

Table 1. Some companies which have developed and/or manufactured TFBs

Performance attributes of the Bates battery ignited a worldwide pursuit of energy storage in thin films. Figure 2 shows the number of US patents which mention TFBs, by country, that have issued since the award of the original LiPON patent. 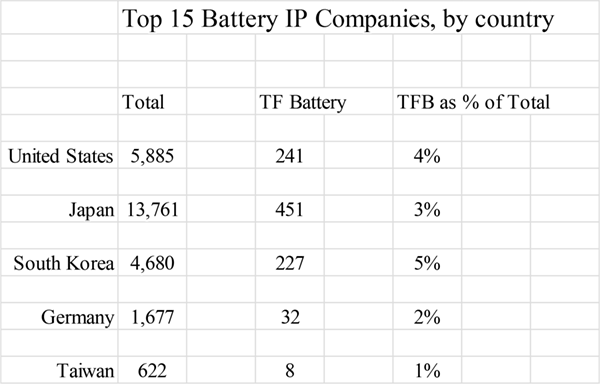 Table 2. US patent applications for TFBs and batteries made by thin film approaches 2012 - 2015

Convergence of Battery Technology with Microprocessors Designed for Portable Electronics

During the 20+ years since the LiPON electrolyte patent there has been progress in the manufacturability (cost) of TFBs in concert with substantial reductions in the size of microprocessors and the Energy Per Instruction (EPI) required for most operations. A robust market for thin film batteries has emerged from this confluence. New device classes (loosely termed the Internet of Things, including personal fitness trackers, active RFID tags, and wireless sensors) will all benefit from better batteries. Figure 3 provides an estimate of the anticipated number of these micro-mobile devices to the year 2018. 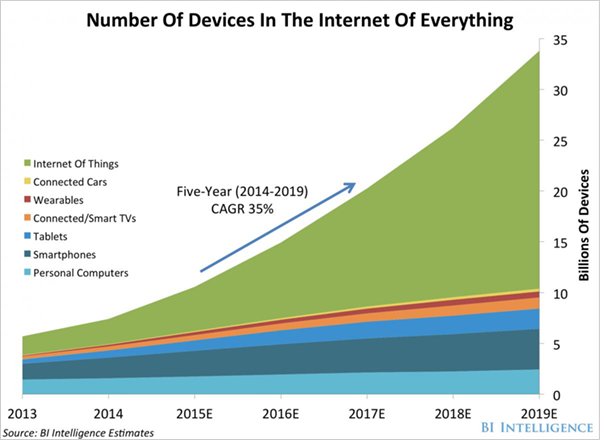 Many features of the original Bates battery were revolutionary but the total amount of energy stored is tiny. Researchers continue to explore innovations that may improve the energy density of TFBs. Approaches include high-density battery architectures, arbitrarily thick cathodes, alternative anodes, and ultra-thin (flexible?) substrates.

Films layers of the battery are 'thin' but the host substrate is massive. Typical substrate-to-battery thickness is 10-to-1. Early concepts to increase cell density include deposition on both sides of an arbitrarily thin substrate. Figure 4 describes a possible dual-cell configuration that improves the substrate-to-battery ratio.

Use of textured layers

Increasing the interface area between cathode, electrolyte, and anode for a given planar footprint, enables more and faster ion transport. The company Sakti3 (now part of Dyson), has recently filed a patent on this approach (Figure 5). 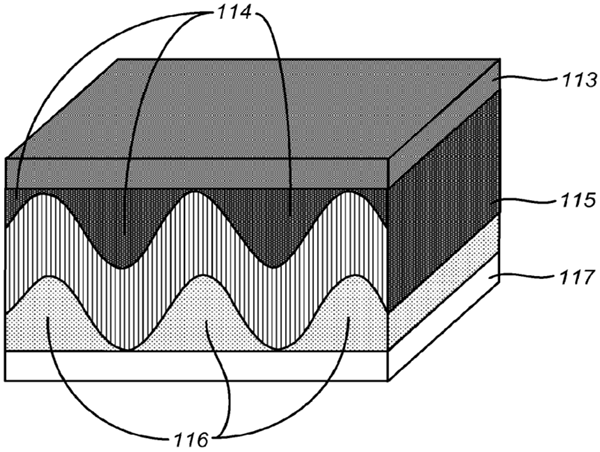 Increasing the cathode thickness is an obvious approach to housing more lithium ions in TFBs, but this approach has drawbacks. Typically, as a sputtered film gets thicker it becomes less smooth. Thin film growth becomes irregular as thickness exceeds a few microns, as stacking errors and competing growth processes dominate. Cathodes at 15 - 20 microns thick have been demonstrated but the resulting roughness creates a challenge for deposition of a dense, pinhole-free, electrolyte film to encapsulate the cathode. Needles or peaks on the cathode may breach the electrolyte layer and short the battery (Figure 6). The useable transport distance of lithium ions through a thick cathode is also suspect, as some researchers have reported limits at a few microns. 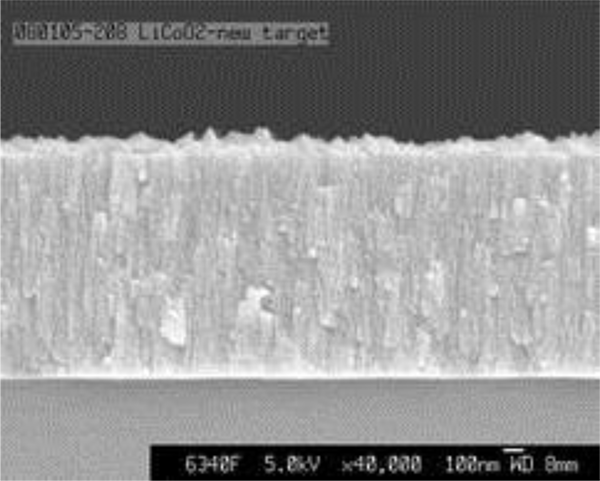 There has been some success using new, micro-thin substrate materials for TFBs. The best ionic conductivity in a LiCoO2 cathode is achieved in a crystalline structure, which requires a high temperature anneal of the as-deposited amorphous film. This step is typically done ex-situ in ambient air at ~ 700°C. Both the substrate and cathode current collector must be able to withstand high temperatures, limiting substrates to materials like Al2O3 or stainless steel. The availability of micro-thin substrates from Schott and Ohara, Figure 7, may improve energy density and enable some mechanical flex.

No Moore's Law for Batteries

Beyond the optimization of the original Bates battery further advances in energy density may have to come from new chemistries.

In a 2013 article [6] Fred Schlachter described our collective expectations for all technologies to advance according to Moore's Law (or observation). The article details why that is not possible for batteries, as the size of a lithium ion is ~ 16,000 times the size of an electron. The author concludes that the only path forward to higher energy density is the discovery of new storage materials.

One of the pioneers of TFBs, Dr. Nancy Dudney, continues to hunt for alternative materials which may advance TFBs and batteries in general. Her work on the cathode Li0.2Mn0.54Ni0.13Co0.13O2 paired with the LiPON electrolyte results in a 5 volt TFB (Figure 8) [7]. 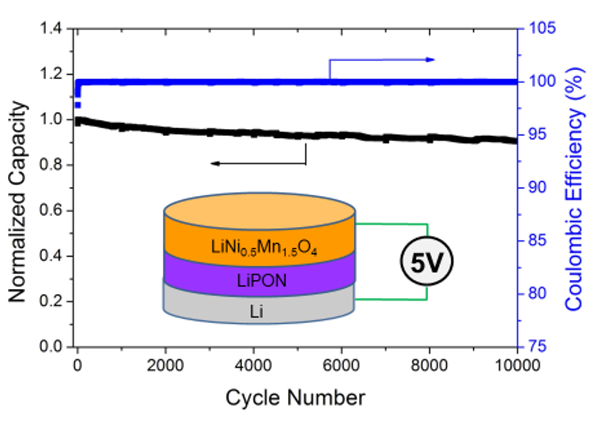 Figure 8. Performance of the 5 volt TFB based on the material couple Li-Ni-Mn-O & LiPON [7]

There are several electrolyte materials which could improve the charge/discharge performance of TFBs. Several materials were reviewed by Kamaya, et al.. and compared to LiPON [12]. The electrolyte Li10GeP2S12, a superionic conductor, emerges as a possible replacement for LiPON.

Techniques such as Atomic Layer Deposition (ALD) have been demonstrated for the electrolyte LiPON and other materials in the battery stack [8, 9, 10]. The use of ALD for the deposition of LiPON leverages the extreme conformity that can be achieved through precise monolayer thin film growth with the near monolayer electrolyte thickness. This near perfect conformity allows the use of arbitrarily (thick) rough or textured cathode layers. Thin electrolyte layers also reduce transport distance for ions, improving the charge/discharge rate of the battery (Figure 9).

The discovery of new battery materials may also be advanced through the use of Combinatorial Magnetron Sputtering (CMS). In CMS multiple sputter guns are employed simultaneously to deposit a broad spectrum of precursor combinations. Cal Tech researchers recently demonstrated a robotically controlled sputter gun array that produces compositions from up to seven elements [11]. Coupled with their two-stage high-throughput characterization approach, Cal Tech can evaluate ~5,000 samples in 24 hours.

Performance of TFBs including cycle life, safety, and charge/discharge rate has enticed researchers to apply what has been demonstrated in films to bulk batteries through the manipulation of materials properties on the sub-micron scale. The Internet of Things may have created a robust market for micro-batteries and the application of thin film approaches to bulk batteries may resolve the 'range anxiety' issue for electric vehicles.

Researchers at ORNL [7] have demonstrated cathode/electrolyte materials pairings for higher voltage batteries with the intent of applying their findings to large capacity energy storage devices. Companies such as QuantumScape [13] and Sakti3 [5] have utilized vacuum-enabled thin film approaches to identify materials pairings which may be scaled to bring the attributes of TFBs to electric vehicles and vacuum cleaners.