Polymeric and rubber tubes (also called hoses) are used in vacuum applications for their flexibility, low cost, and relative ease of installation; however, they have high outgassing properties and are permeable to atmospheric gases with permeation rates rapidly rising with increasing temperature.

With the exception of small diameter thin PTFE tubes, polymers and rubbers are not used in high vacuum condition. Even at rough vacuum conditions, the commonly used PVC or rubber tubes have a narrow operating temperature range. Below ~10° C, the tube has limited flexibility. Above ~50° C the tube may be too soft, too permeable, and too "gassy" to be useful. If the tube is long and its diameter large compared to wall thickness, unsupported tubes may collapse under vacuum, particularly if required to make a sharp bend. 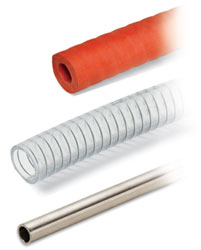 Rubber tube is very susceptible to vacuum collapse and an internal spiral wire is recommended. However, this is not a complete solution because the spiral can slip and "flatten," particularly where the tube length exceeds 12" (30 cm).

The commonly used plastic tube, polyvinyl chloride (PVC), is not naturally flexible. It is made so by adding a liquid organic plasticizer, usually dinonylphthalate. The presence of this plasticizer limits the ultimate pressure inside the PVC tube and, together with its permeability, confine its use to forelines.

As with rubber, PVC needs internal reinforcement to avoid collapse when evacuated. Fortunately, PVC tubes are available with spiral wire molded into the plastic. Standard length tubes can also be purchased with metal half-nipples already mounted. When mounting to metal tubes, use radiator or hose clamps to secure the PVC tube. Never bake PVC.

PTFE is expensive and lacks the resilience and elasticity of rubber or plasticized PVC.

It is not used for forelines.

Unfortunately, it is frequently used, as small diameter tubes, in external gas delivery systems. PTFE's permeability makes it useless for this application. The fact that the internal gas pressure is above atmosphere is no argument. Permeation is a molecular flow phenomenon, and the internal pressure does not affect it.

Suitably outgassed, thin wall PTFE tube, with a loosely fitting internal wire, is a good insulator and as been used at UHV pressures. 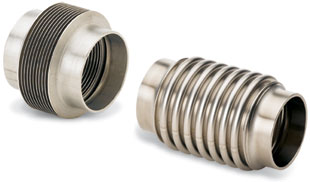 There are two methods:

These are made by pressurizing water inside a thin-wall tube mounted inside a die with a concertina surface. Formed Bellows have restricted flexibility and are far from "floppy." They are used in applications requiring a semi-permanent change of direction or a rugged design. They are often used as foreline connections or to join manifolds to rough pumps.

A stack of thin punched diaphragms are sequentially welded around the inner and then the outer circumferences. EWBs are much more flexible than Formed Bellows, enabling some motion in the X- and Y-directions, in addition to a large motion in the (axial) Z-direction.

They are more easily damaged and must be rigidly supported at the ends to prevent complete collapse on evacuation. If used horizontally, they may need central support. They are used on manipulation devices requiring X, Y, and Z motion. If not significantly bent, the gas conductance of either type of bellows is about the same as a rigid tube of equal I.D. and length.

Wide bore bellows are often proposed as vibration isolation devices between a pump and chamber.However, under vacuum a bellows contracts, often to its minimum possible length. It then acts like a rigid tube with minimal vibration isolation.

Any degree of vibration isolation requires some elastomeric component—for instance, rubber blocks—between the flanges to restrict the bellow's collapse. Shortening under vacuum applies to all bellows and, if not recognized, can lead to premature failure.

A KJLC® salesman was present at a customer's facility while a 0.75" I.D. bellows between the chamber and mechanical pump was being replaced by a 1.5" I.D. bellows. When the pump was restarted, the customer's technician shouted, in awe, "The pump's levitating!" Indeed, the pump (which weighed less than the ~26 pounds force being applied) was 3" above the floor.