The formal definition of pumping speed is:

With less formality, but perhaps more clarity, pumping speed is a measure of the pump's ability to permanently remove gas from its inlet port.

Pumping speed is a volumetric flow measured in units of volume per unit time, specifically:

Various standards organizations in the United States, Europe, and Asia have specified methods for measuring pumping speed. As far as we are aware, all suggest capping the pump with a small volume dome at its inlet port and monitoring the pressure at various gas flow rates into the dome (from a calibrated mass flow controller). The results are plotted as pumping speed vs. pressure as shown in the chart below. 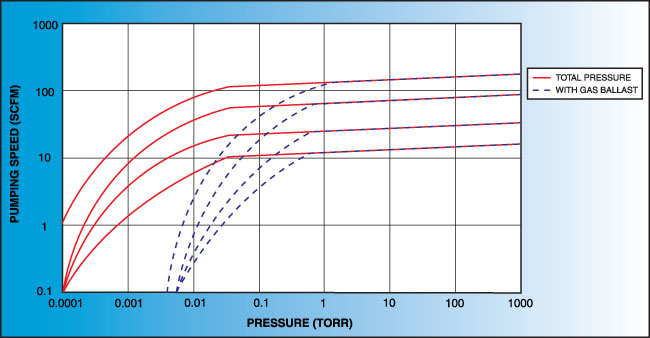 Because a pump's pumping speed is measured under ideal conditions, its numerical value will be unobtainable in a practical system — the connection between any pump and any chamber affects the pumping speed (see Effective Pumping Speed).

The units are volumetric flow rate and the value is easily mistaken for a measured pumping speed. However, displacement/capacity appears to be a theoretical pumping speed the pump might have if the gas:

Why pump manufacturers indulge in such an exaggeration is unknown.

It only confuses those attempting vacuum calculations. We strongly suggest displacement/capacity values be ignored or, in the absence of a measured pumping speed, multiplying displacement by ~0.75 to get an approximation of the real pumping speed.