Residual Gas Analyzers (RGAs) work their wonders using mass spectrometry. While there are many texts explaining mass spectrometry — various types, geometries, ionization methods, applications, etc. — this article has no such lofty aspiration. It might be titled “Mass Spectrometry for the Masses.”

Imagine you are at a baseball stadium and you're in the cheap seats, also called peanut heaven or stairway to the stars.

On home plate is a baseball pitching machine pointing over the pitcher's mound, into center field. You see the hopper is filled with little white objects (WOs) but you've forgotten your binoculars. These WOs might be baseballs, pith helmets, or soft-boiled ostrich eggs.

You do, however, have the trigger switch for the pitching machine. You hit the switch once and a WO hammers out into center field. You hit it again and another WO bounds out near the first. A third time, same result. No surprises so far. But on the fourth try, the WO lumps its way as far as the pitcher's mound and dies. What's gone wrong? Did the pitching machine run out of steam? You test this idea by pressing your switch but the next WO tears out into center field again. Immediately following this, however, the next WO flops down along side the one at the pitcher's mound.

In reckless abandon, you hit the switch 100 times — resulting in a heap near the pitcher's mound and a heap in center field. Then, just when you think you know the pattern, the very next WO leaps out like a scalded cat and heads for center field seats. But suddenly the wind catches it and blows it into left field.

After firing many hundreds of WOs, there are two distinct heaps (pitcher's mound and center field) and a third group that isn't grouped at all but blown by the wind.

Since we know the wind is affecting one group, we surmise that it might affect all. So, we throw a roof over the stadium, go outside, attach a massive pump and exhaust all the air. Now, when we try our test in the world's largest vacuum system, we get three perfectly ordered heaps: (1) at the pitcher's mound; (2) at the center field wall; and (3) in the cheap seats.

What can this possibly have to do with mass spectrometry? Well, examine one explanation of our experiment. We have a machine, the pitching gun that imparts the same energy to every WO. We also have that famous crossing field, discovered by Newton after being conked by an apple, gravity. An explanation might be that the WO heap near the pitcher's mound are heavyweights; things that fit the pitching machine but are much heavier than baseballs. The center field heap are medium weights (possibly real baseballs), while those in the seats are definitely lightweights (maybe Wiffleballs?). In effect we have invented a weighing machine that determines mass from the object's trajectory in a crossing field.

Can we use gravity as the crossing field for atoms and molecules? Hardly. Our best balances resolve 10-7 grams and the uranium atom weighs 3.95 x 10-22 grams. No, gravity is fine for baseballs but pretty useless for mass spectrometry. So, what can we use? Well, if you remember any schoolboy/schoolgirl physics at all, you'll know that of nature's four forces (gravity, weak, electromagnetic, and strong) gravity is the 90-pound weakling and the electromagnetic force is the World Wrestling Federation's champ (1036 times stronger).

But if our plan is to use an electric or magnetic crossing field, we can't use neutral atoms and molecules. They won't respond. We must use an ionizer to kick out an electron from each molecule. Then, when we squirt those ions through, say, a crossing magnetic field, we are using identical technology to an electric motor. In your advanced physics maybe you recall— “a current traveling at 90° to a crossing magnetic field causes motion in the third (orthogonal) axis.”

If all ions are given the same energy, then their “motion in the third (orthogonal) axis” (i.e., their degree of deflection) depends on their mass. A magnetic mass spectrograph closely resembles our pitching machine analogy. Except here, the heaviest ions are bent least. 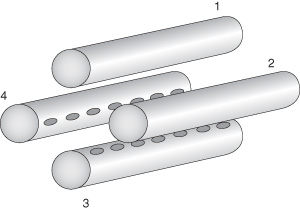 Most present-day residual gas analyzers, however, are of the “quadrupole” type. No, the spelling is not wrong. Unfortunately, making an analogy for this type of mass spectrometer is far from easy. But try this:

take four large diameter drinking straws and in each, drill a row of holes down the length. Now place the straws in a square parallel array with the holes facing the common axis. Block one end of each straw and arrange for air to be blown and sucked alternately into opposing pairs. That is, 1 and 3 have air blown in them while 2 and 4 have air sucked out of them, then vice-versa.

Call this part the “blow-in cycle” and “suck-out cycle” and think of it as occurring many times a second.

We now start all the huffing and puffing and throw a handful of polystyrene foam balls down the center of the array. To make it interesting let's throw in balls with three different weights. Do you recall your last visit to your local amusement park? Did they still have a shooting gallery where the ping-pong balls bounced around on water jets? Well, that's what happens to our foam balls. They bobble about inside the straws as they move from entry to exit. Better yet, balls that are too light will eventually hit straws with suck-out bias while balls that are too heavy will eventually blunder into straws with blow-in bias. You have, of course, immediately leapt to the question, “What about balls with the right mass?” Yes, they wander on, never once touching a straw, until they clear the array. There, we collect them in a bucket (Faraday cup, if you're polite) and determine their percentage of the total sample.

But this leads immediately to the question, “What about measuring the balls of other masses?” It's pretty easy actually. We gradually raise the pressure of the cycling “supply” and (proportionately) the pressure of the bias supply too — balls of every mass are transmitted in sequence. 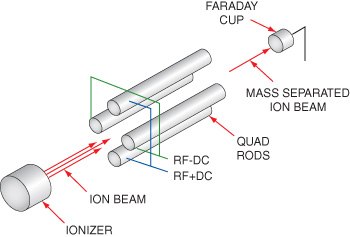 In real-life, the straws are polished metal rods, the cycle supply is an RF voltage generator, and the bias supply is ±DC voltages that track the RF voltage.

A mass spectrum is made raising the RF peak voltage with respect to time. The DC voltage bias (“+” to one rod pair and “-” to the other) is maintained at a fixed ratio to the peak RF voltage.

(Did I warn you the analogy wasn't very good?)

An interesting contrast can be made between magnetic and quadrupole RGAs. A magnetic sector mass spectrometer acts on different ion masses just as a glass prism acts on white light. It separates the ions by mass but doesn't remove any. The quadrupole mass spectrometer acts like a piece of colored glass. Although white light shines at it, only light of the glass color is transmitted. Other frequencies are removed. This gives rise to a common name for the quadrupole device: mass filter.

A residual gas analyzer (RGA) of either magnetic sector or mass filter type is simply a mass spectrometer that analyzes the gas remaining in a vacuum chamber. RGAs are vital for anyone seriously interested in vacuum diagnostics. With one, you can easily detect air leaks, cooling water leaks, oil backstreaming from the pumps, fluorine and chlorine left over from sloppy solvent clean-outs, chamber contamination from previous samples, and (that most devious of problems) a through-leak in a gas supply valve.

Without one, vacuum diagnostics is restricted to the total pressure gauge telling us, “Oh, the system is OK, I guess."